(CNN) As North Korea continues to boast of its military power with missile launches and bomb tests, resettled defectors from the totalitarian nation are torn: Some hope for an end to the vocal hostilities between North Korea and the United States, while others wish the tense rhetoric would result in military action against the regime of Kim Jong Un.

“If I think about it politically, for future freedom, then I’m hoping North Korea will shoot a missile to somewhere and then the US or the South Korean government will take action,” Grace Jo, a North Korean defector living in Maryland, told CNN.

Jo, 26, grew up in North Korea in the 1990s at the height of the famine years, which killed around 1 million people, according to experts on the isolated country. She lost her father and four siblings before fleeing with her mother and older sister to China, and from there sought asylum in the United States.

Like many other human rights activists raising awareness of conditions for North Koreans, Jo has grown frustrated. 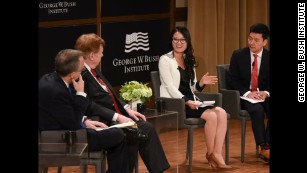 “The North Korean regime should not exist,” she said fervently. “For many years, nothing has been accomplished politically. We have to find a way to shut down the leader and the military power.”

Jo said she doesn’t want to see innocent people killed, and she expressed concern for the citizens of North Korea, but for the long run, she said, military action is necessary. The harsh language coming from the Trump administration gives her hope.

“The strong words maybe will work. Before, all the presidents tried to treat North Korea in a nicer way and it won’t work,” she said.

“I think Kim Jong Un is a young child,” he told CNN via an interpreter in a conference call. “He doesn’t know what he’s doing.”

Growing up an orphan under the regime of Kim Il Sung — grandfather of the current leader, and founder of the dynasty that has ruled North Korea since 1948 — Young Sik Kim remembers a different country. He said the older leader took care of his people by investing in agriculture, while his grandson is focused solely on investing in nuclear weapons.

He acknowledged the high cost of war to the land and people, but said he is determined that North Korea should be “wiped out and reconstructed.”

Joseph Kim, 27, who is still searching for the sister and mother he lost when they fled to China, holds a different approach.

“I feel really sad for this political language. The words that have been exchanged between Pyongyang and Washington are ridiculous,” he told CNN from Washington, where he is on an internship between semesters of political studies at Bard College.

“I hope both leaders realize it’s a matter of thousands and thousands of lives and it would be tragic if anything happens with a military conflict,” he said. 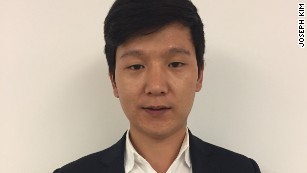 Joseph Kim defected from North Korea to the United States in 2007.

Kim’s father died of starvation, prompting his sister and mother to cross the border to China in search of food and work. He hasn’t seen them since.

Kim fled to China three years later and made his way to the United States with the help of an activist. He delivered a TED talk in 2013 detailing the story of his life in North Korea during the famine years, and the online version has surpassed 2 million views.

“I still haven’t given up hope to see you,” he said as he teared up during his TED talk, directing his words at his sister.

Kim shares Jo’s frustrations but said he thinks the possibility of a nuclear war is unbearable. He wishes for a more restrained approach when it comes to President Trump.

“I hope he realizes that what he says matters and has significant meaning to the general American public and the rest of world,” he said. “I don’t think such provocative statements produce any good results.”

Charles Kim, 48, spent six months in a North Korean prison. He had fled to China, was caught and sent back across the border, but persisted in his attempts.

“Once you get a taste of what freedom is like, it’s like drugs — you’re going to do it again,” he said through his interpreter. “In prison you are not treated like a human. You are not really alive. You work all day and hardly have any food.”

Charles Kim said he was forced to bury executed inmates while in prison. He cut all ties with his family because “even if you’re released, your family will have a bad name and your children will face government oppression.”

Despite leaving behind his son and ex-wife, Charles Kim — today a resident of Charlottesville, Virginia — is a proponent of an American action. He thinks the North Korean dictator is taking advantage of the American democratic system.

“Kim Jong Un knows that even if Trump says he’s going to war he cannot, because in a democracy there are different groups and if enough people won’t agree, Trump won’t be able to do it,” he said.

As far as he is concerned, Charles Kim said, Trump could not be tougher in words or actions when it comes to human rights violations in his country. “At this developed stage, Trump needs to do everything he can to stop Kim Jong Un,” he said.

According to Lindsay Lloyd, deputy director of the Human Freedom Initiative at the Bush Institute, there are around 225 “direct” North Korean refugees who have received asylum in the United States following the North Korean Human Rights Act of 2004. These defectors usually go through China and then to Southeast Asia, where they apply for asylum.

Another 250 North Koreans in the United States arrived as legal immigrants after spending several months or years in South Korea, and obtaining a South Korean citizenship. Despite being born in North Korea, they are registered as South Koreans on America’s doorstep, Lloyd said.

As for undocumented immigrants from North Korea, they are “all over the map,” Lloyd said, estimating they are fewer than 1,000.

A 2014 Bush Institute research revealed North Koreans also have conflicting feelings regarding their assimilation and opportunities in the United States.

“In many cases, the support provided to refugees in the United States was stellar and participants believed the help they received, despite the challenges they faced, allowed them to very quickly

“For others, however, outside help was scarce and it was not only a struggle to acclimate to their new surroundings, but to achieve a minimal standard of financial independence,” the report said.